What if every teacher approached his or her work with a legacy in mind? What if all educators viewed the future of other people’s children—i.e., their students, not just their own biological kids—as a significant part of their legacy?

That’s what Robert Croston, principal of Jenner Academy of the Arts elementary school in Chicago, did.

On March 5, Croston, 34, passed away from Marfan syndrome, a genetic disorder that affects the body’s connective tissues. But five days before his death, he lived to see the Chicago Board of Education approve his hard-fought proposal to merge Jenner—an extremely under-enrolled, low-income African-American school in what remains of the Cabrini Green projects—with nearby Ogden International School—an incredibly overcrowded, mostly White and Asian school in the highly affluent Gold Coast neighborhood.

For urban districts like Chicago, where neighborhoods are segregated based on race and income, a Jenner-Ogden merger only exist in one’s dreams. But like Martin Luther King Jr., Croston, who was also a preacher, actively worked to make his dreams come true.

He, along with Ogden principal Michael Beyer, who is White, joined forces and modeled the racial collaboration they both hoped to create by blending both of their schools.

Croston helped lead the charge, writing articles and speaking to the press to lobby for the merger. He and Beyer eventually took a back seat to allow the Jenner-Ogden steering committee made up of local parents, teachers, clergy and community members, to lead the effort.

There was a small but loud group of Ogden parents who resisted the proposed merger, commissioning multiple studies, convening public meetings and launching petition drives against it. They argued that Ogden wasn’t all that crowded; that the eight-block walk to Jenner would be too dangerous for their young children; that it would inflict too much cultural dissonance for the kids; that the quality of education their kids received would plummet.

It was hard not to interpret their coded language as racially charged.

And in a district that, with little public debate, closed 50 schools in 2013 in mostly Black neighborhoods due to under-enrollment, I found myself frustrated that the school board spent two years deliberating the Jenner-Ogden merger.

Good thing Croston, Beyer and their supporters never gave up!

wikipedia brown will not yield not one second

I know I wasn’t the only one who told Rob this stuff. But he really believed. He really believed that he and his colleague at Ogden could create a racially and economically diverse, inclusive school if they worked at it and fought for it. Whether or not he even got to work there.

wikipedia brown will not yield not one second

The last time I saw Rob he was showing me around Jenner and we were planning for me to come in and do some afterschool teaching. I took this picture of a sign one of the veteran teachers had left on his door.
GOD IS BIGGER THAN THE CHICAGO BOARD OF EDUCATION.
I think of it often. pic.twitter.com/MsONt4VNYf 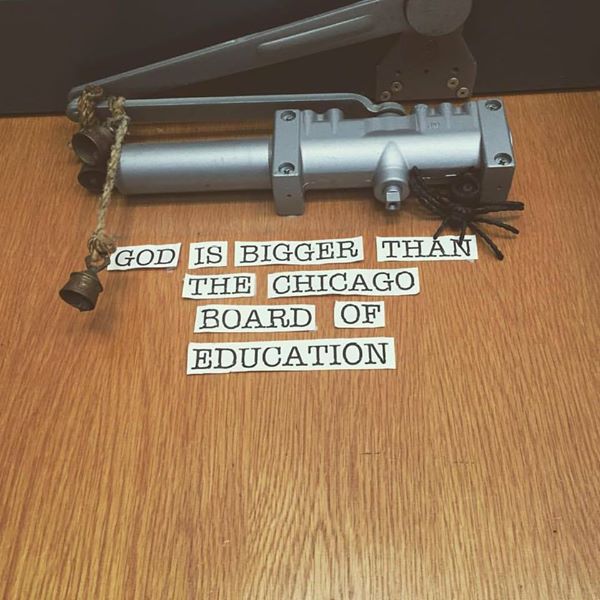 While I regret that I never had the pleasure of talking to Croston, though we followed each other’s blog posts about Jenner-Ogden and connected several times on Facebook. I once got to know his wife Sheena, who is also an educator, at a citywide professional development meeting. Without a doubt, the two of them were deeply in love.

Rob Croston’s illness caused him to miss a year or more of work, which put a financial strain on the family. He spent a significant amount of time in the hospital, and “Rise Up Rob” became a rallying cry of a support campaign.

I learned of Croston’s death during a casual check of email on my phone during a professional development meeting in San Francisco. A wave of sadness came over me. I sat there and silently cried.

Rob Croston was the real deal. He loved God. He adored his wife. He was genuinely invested in his students—and all students. He believed that education equity could be achieved, stressed the research that shows that White children benefit from learning alongside Black students and teachers, just as much as, if not more, than the reverse.

Rob Croston left a legacy of doing right by other people’s children because he saw them as a bit of his own. When I think about it, that’s a legacy for us all.